Saga of the Outer Islands

Book One: Ghosts of the Sea Moon

Come join Rafe Morrow on his first adventure as captain of the Celestial Jewel. Sail with him and his mysterious passenger on a journey to the Stone Fire Islands. A Saga of the Outer Islands companion short story.

Map of the Outer Islands
(not to scale)

Map of the Realms of the Gods
(not to scale)

Check Out the Ghosts of the Sea Moon Audiobook

Book One: Ghosts of the Sea Moon

In the Outer Islands, gods and magic rule the ocean. Now they might destroy it all unless Captain Rafe Morrow goes to war with his sister.

Sailing the treacherous seas, the crew of the Celestial Jewel rescue drowned souls from ravenous sea monsters and ferry them to the After World. Their captain, Rafe Morrow, has dedicated his life to protecting the lost and defending the islands. For years it has been a rugged life, but now, from the shadows, an ancient creature plays a larger game, shifting the tides into perilous danger.

The Goddess of the Moon, Rafe’s sister, wants him dead. Allying with forces that want her brother’s destruction, she changed the rules and set her monsters loose to wreak havoc and revenge. Heedless of the consequences, her actions put both the living and the dead in peril.

With the survival of two worlds hinging on their courage and cunning, how far will Rafe and his crew go? Will Rafe kill his sister to save everyone else?

And what of the black-winged malevolence using everyone as pawns…

Set sail on a harrowing adventure with ghosts, gods, and sea monsters.

To order the book go here:

Ghosts of the Sea Moon 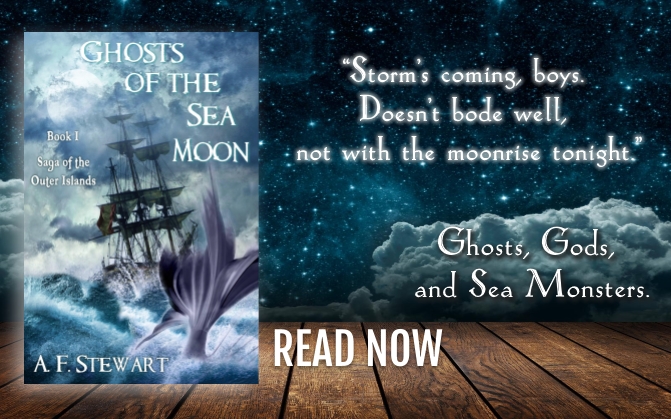 Excerpt from Ghosts of the Sea Moon

Captain Rafe Morrow paced the quarterdeck of his ship, Celestial Jewel, the signs of an oncoming squall setting him on edge. Blustering wind rattled the sails and the crew’s nerves, their usual jaunty hubbub reduced to grumbling and snipes. Trouble travelled on that wind. Rafe could smell it woven in the air, and his blood prickled with a sense of worry. The ship trembled as if with warning. He glared at the sky and its darkening clouds painted amber and crimson from the setting sun. A storm sky coming ahead of a full moon meant dark magic and sea monsters would prowl the waves this night.

A trickle of blue energy raced across the back of his hand at the thought.

On the breath of a sigh, he whirled to face his crew. “Storm’s coming, boys. Doesn’t bode well, not with the moonrise tonight.”

“How long, Captain? Will we be in the thick of the weather or just what comes after?” A rough-edged sailor, Pinky Jasper, spoke up, but all ears of the deck crew listened for an answer.

“It’s coming within an hour or two, out from Raven Rock, by my reckoning. After nightfall by certain. We’re heading in, boys, but we’ll likely hit the edge of it.” He heaved a breath, exhaling. “It’ll be a bad one even for this crew so expect trouble.”

A shiver of tension settled over the deck. Some of the crew cast worried glances at the sea and each other. Others shivered, and a few more whispered prayers. Storms brought bad memories and nervous anticipation to the sailors of this ship.

“Which port then, Captain?” The mariner at the ship’s wheel chimed in. “Might make Abersythe if we head north.”

“We might, Anders. But we head east. We’ll race the edge of the tempest, but it’s closer and the ship will find better shelter anchored at Crickwell Island.”

“Aye, sir. Laying in course to Crickwell Island.” One-Eyed Anders turned the wheel and the ship’s bones groaned. Others of the crew adjusted the sails, and the Celestial Jewel leaned into her new bearing headed east.

Characters in Ghosts of the Sea Moon

From the depths, darkness is rising…

Something ancient and powerful stirs beneath the sea of the Outer Islands. A creature strong enough to challenge Captain Rafe Morrow, God of Souls, for control of the dead and the survival of the living.

Still reeling from the aftermath of his battle with the Goddess of the Moon, Rafe and the crew of the Celestial Jewel find a mysterious shipwreck and strange tales of bones.

Tasked by a new ally to find answers, Rafe stumbles on long-buried secrets shrouded in the shadows of the Nightmare Crow. Now armies of the dead ascend from the ocean. And their master is not far behind.

Set sail on a new adventure with ghosts, gods and sea monsters!

Raven Rock and the Pirate Keys (not to scale)

Characters in Souls of the Dark Sea

The Royal Navy and the Seven Kingdoms

A god, his mother, and a Nightmare Crow.

Old enemies surface once again and undead pirates roam the seas. The man he killed, Black Axe Morgan, has returned for revenge on Captain Rafe Morrow, while from the shadows the Nightmare Crow reveals his true self. The two form an alliance and bring mayhem to the seas, all to draw out Captain Morrow and his crew.

Yet, this time, Rafe doesn’t face his enemies alone. Death walks the Outer Islands to save her son and the Sovereign of the Gods leads Captain Morrow past all the lies to the truth. The fate of Chaos and Harmony itself hangs in the balance of this fight.

Will centuries of schemes and plans reforge the bond of the realms, or will the Seven Kingdoms and the Outer Islands fall?

Can the God of Souls find his destiny before it is too late?

The endgame of gods begins…

Characters in Renegades of the Dark Sea

The Royal Navy and the Seven Kingdoms

© All Rights Reserved A. F. Stewart

For a bit of ambient atmosphere check out this mix of a sailing ship.

Follow Be Afraid of the Dark on WordPress.com
Join 10,049 other followers

Check out EPIC: Home of Indie Fantasy and Si-fi.

New design up on my Redbubble store. #mugs #marbledesign